Hoka One One - Review 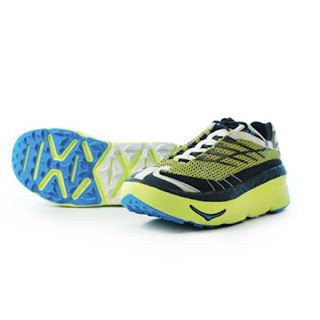 When I first heard about the Hoka One One trainers I was very skeptical about them. They looked totally wrong to me especially as I had spent the last 18 months running in more minimalist trainers like the Inov8 Road-X 155 and Bare-X 150: I had converted to a more barefoot approach to my running after a stress fracture in the spring of 2011. I had always favoured a more racer-trainer with my slight build.

My coach, Carolyn Hunter-Rowe: twice World 100 km Champion and World record holder for 40miles on the track, had always advised me not to wear racing flat for 100 km on tarmac as from her experience she had found them very unforgiving... and I believe it's worth listening to a double world champ and a world record holder.

So when I was selected to run for England at the British 100 km Championship I suddenly had a dilemma on my hands, could I risk ignoring my coaches advice? I was also suffering with a swollen 3rd metatarsal which was getting very sore after running in barefoot trainers.

So with an open mind I looked again at the Hokas. I was drawn to them because of the 4 mm drop and some of the online reviews: the Hokas were like Marmite, reviewers either loved them or hated them. I was intrigued by how some people were saying how less fatigued they felt in them and how they were recovering more quickly from running Ultra Marathons in them. I took the plunge and decided to try them.

When I first picked up the Bondis I had been sent, like so many people say, they felt incredibly light for so much trainer, the sole is rather large, but they felt lighter than an old pair of Nike Structure Triax I used to have. My first concern with such a big sole was: would I still be able to run on my forefoot as I am a forefoot striker?
I also had to go up to size 8, which is nearly a size bigger than Im used to wearing.
The Bondi felt very comfy on with plenty of toe room and walking around the house I enjoyed the feel of the rocker.

My first run in them was an easy 4miles the day after a fast hard 15 km road race, I did feel slightly self-conscious running in them with such a big sole and wondering if I looked like someone from the nineties! The Bondi felt incredibly bouncy: like I was just bouncing along the road and I found I could still run on my forefoot.

I next tested them out on a hilly 20mile road run, again they felt really comfortable on and considering the size of the sole they didn't feel clumsy at all. My metatarsal wasn't giving me any problems: I couldn't feel it at all. I found I could run up hills really quickly then the fun really began as I ran downhill! As they advertise they really do make you fly down hill.
I ran the 20miles in a comfortable 2hrs 11mins and was surprised how good my legs felt at the end of the run. I was even more amazed how fresh my legs felt the next day and I was not suffering with any pain in my metatarsal. 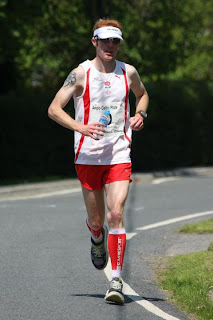 After another 20mile road run and several other road runs of different lengths I decided to wear them for the British 100 km Champs, I was now enjoying the bouncy feel of them and whilst at times I did miss the feel of being close to the ground I had in more minimalist shoes I was enjoying running without any pain in my metatarsal.

I was the only runner wearing Hokas at the British 100 km Champs. Some of the other ultra runners commented on the Hokas, some of them also said that they had tried them and had felt that the Hokas had changed their gait too much: something I hadn't really experienced.
You can read my blog for the 100 km on here and how hot it was and how I struggled with the heat and cramp! It was suggested that one of the reasons I was cramping up was due to the Hokas changing my gait, but I knew I hadn't done the mileage I normally put in for 100 km races as it was a last minute decision to run and I know I suffer really badly with cramp in heat. So it’s unreliable to state that the Hokas caused my cramp.

What amazed me was how quickly my legs recovered from the 100 km, though my time was 24 mins slower than when I finished my previous 100 km. Unlike back in 2009, when it took me 2 weeks before I could run again, I was out on the Friday (5 days after the 100 km) running 5miles. My legs felt like they had run an ultra but they didn't feel totally trashed and the following week I was back to normal training. 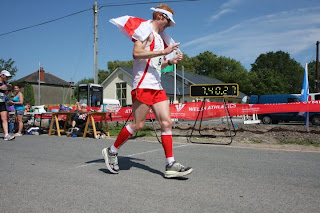 5 weeks after the 100 km British Champs I was competing in the inaugural New Balance Ultra Tour of the Peak District a 56mile trail ultra with over 2700 m of ascent. I had been able to get some quality miles of training in prior to the race but my metatarsal had flared up again having been aggravated running on rocky trails. The Friday before the race I was given a pair of Hoka Mafate 2 to try out.

The Mafate 2 felt a little heavier on my feet than the Bondi. On a short test run they didn't feel too bulky and I could run over stones and tree roots and not feel my swollen metatarsal. 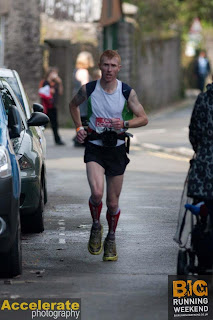 The Mafates were great on the trail ultra. They offered enough grip on the muddy boggy sections of Peak District trail and even with such a high sole I didn't go over on my ankles as I feared I could do. They also felt great on the intermittent road sections as I just bounded along.
Once again I was amazed by how good my legs felt after the 60mile trail race, they didn't feel totally wrecked like they have done previously and I was back out training again a few days after the NBUTPD. 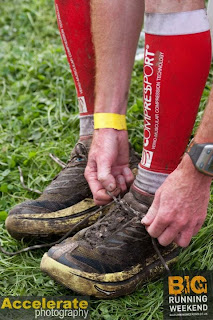 Conclusion
It has been interesting hearing other peoples experience of the Hoka; they are a bit of a marmite of a shoe: you either love them or hate them! And as a barefoot fan, I probably seem like the most unlikely candidate for Hokas, but I really enjoy wearing them; they are real fun to run in. My metatarsal problem has been clearing up and I am really surprised by how quickly I am recovering after Ultra Marathon races.
Don’t get hung up on the look of them, rather than letting the aesthetics be the concern, let your legs decide, they wont be disappointed.

Thank you to Mark Barnes at HFP Consultants and Steve Couper at Sidas UK for letting me play with the Hokas.
Photographs courtesy of Ian J Berry and Accelerate-Big Run Weekend
Posted by Marcus Scotney at 12:56

Marcus Scotney
I am a runner who is prone to running long distances but also loves the challenge of pushing the body hard in short races.